Join via Zoom
Facebook Instagram Twitter YouTube Email
It was a dream come true for the occupants of Oyo State and its environs. The long-awaited program which has taken place in 2014 with the topic, “Arrival Of The Master” has been repeated in an unimaginable dimension with the theme, “God Has The Power To Do This Or That“.
Despite the news of daily downpours (rain) which has been recorded in the State for some time, the Lord magnified His name by giving us conducive weather for the two days of the program. Amazingly, it has been done, dusted, and left everyone in astonishment as a result of the mind-blowing miracles, spectacular blessings, and indescribable open doors which God has meted to all the participants.
Our Daddy and Mummy in the Lord with their aid arrived in the state and were warmly received by the cabinets of the Oyo State government and their Governor, His Excellency Engr. Oluseyi Abiodun Makinde. Thereafter, the Executive Governor requested that the man of God pray for the will of God to be done in the state and country in this political season. In turn, Pastor Lazarus Muoka prayed for God’s abundant blessings, grace, peace, and protection upon the occupants of the State and the world at large.
The Miracle Program commenced with powerful choruses of Thanksgiving, trust, and faith in God which were sung by the chorus leaders, and other choristers. 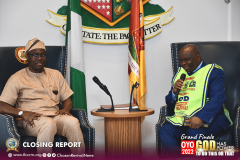 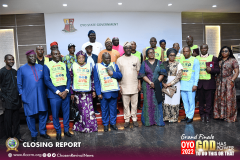 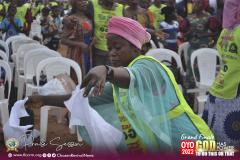 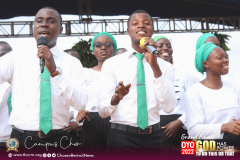 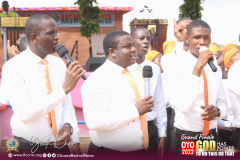 1 2 ... 4 ►
A lot of people trooped into the crusade ground to receive from God, also in attendance was the Executive Assistant to the Executive Governor of Oyo State, Rev. Idowu Ogedengbe.
Many who were sick and maimed received their healing at the instant of prayers and freedom declaration from the mouth of God’s servant, Pastor Lazarus Muoka:
24, 25, 27, and 35 years born deaf and dumb spoke and heard.
16 years of madness were rolled away.
33 years of paralysis and inability to walk were healed.
Worthy of note was a man who testified about being strictly warned in the dream when he was still at his former church not to travel to his hometown because an evil man there has marked him for destruction. He has been in this anxiety for 10 years without visiting his village. In 2021, he joined the Lord’s Chosen Church and attended the just concluded crusade in Asaba titled, “Power Belongs To God, Yes!” 2022. After the prayers of God’s servant, he felt empowered and took a bold step to visit his town from the crusade ground for the first time after 10 years. He traveled and returned successfully to the glory of God.
Secondly, on the fifth of June 2022, there was a bomb blast and sporadic shooting of guns in Owo, Ondo State, Nigeria where he owns a school. It happened that a Friday before the Sunday the incident took place, he led his students in a prayer session and told them to declare this: I’m a Chosen (thrice), where is the God of my pastor’s power? Deliver me now.
Two days later which was Sunday, some students from his school worshipped in the church where the bloody incident took place but God preserved all of them.
Another account was the case of a lady who was diagnosed as HIV positive when she was about to get married. In a panic, she called her friend who advised her to go to The Lord’s Chosen Church where God will heal her. She obeyed and today, she has been confirmed HIV-negative by three different hospitals. Hallelujah!
During the sermon titled, “God Has The Power To Do This Or That” the man of God instilled the need for total reliance on God: He is Mightier Than All, He has no Alternative, He can do and undo, He is the owner and source of power, He has the power to do any miracle of your choice. No one should belittle His ability for He is a limitless God. The program recorded a large number of people who stepped out for an altar call to receive the salvation of Christ.
Finally, the servant of God prayed for the congregation, he said, ” Daddy, make them dangerous to danger”. Furthermore, he proclaimed healing upon everyone and asked that the God of all impossibilities move ahead of us to protect and make every impossibility possible.
We return all the glory to God Almighty who has made this crusade a great success. To the arrowhead of this ministry, Pastor Lazarus Muoka, we pray that the Good Lord will strengthen him more and more, in Jesus’ name. Amen.
Drop a word of prayer for the man of God.
OTHER PROGRAM LINE-UPS ARE AS FOLLOWS:
United Kingdom Crusade titled, ” Power Belongs To God, Yes!”.
Date: Saturday 22nd and Sunday 23rd October 2022
Women’s Program titled, “Woman Thou Hast Found Favour With God”.
Date: Saturday 29th October 2022.
Rivers State Crusade titled, ” Power Belongs To God, Yes!
Date: Saturday 5th and Sunday 6th November 2022.
Osun State One Day Crusade titled, “Come And Bless Me These People”.
Date: Sunday 4th December 2022.
Lagos State Crusade titled, “Whom The King Delights To Honour”.
Date: Saturday 19th and Sunday 20th November 2022.
Anniversary Celebration.
December Retreat titled, “Only God Can Do This”
Change Of Garment.
Date: Sunday 1st January 2023.
Mgbidi Lagos Experience titled, “What God Has Determined Shall Be Done” 2023.

Make Them Dates With the Lord, And You Shall Be Mightily Blessed. Amen.